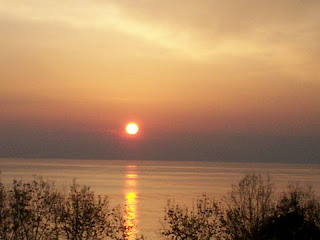 La Terrazza Apartment occupies the entire top floor of a three storey building in the village of Santa Caterina Ionio Marina, on the shores of the Ionian Sea overlooking the Gulf of Squillace.
With 3 – 4 bedrooms and 2 bathrooms, it’s the ideal spot for your Mediterranean holiday. It comfortably accommodates a family or group of 4 to 8 people.
The apartment is fully furnished and comprehensively fitted out to fulfill all of your holiday needs. It has air-conditioning and heating. There are great restaurants to try, and the local markets are simply magical. Take advantage of the wonderful fresh local fish and produce, accompanied by local wines in the comfort of your own home—as well as a full eat-in kitchen & a dining room, the apartment includes outdoor entertaining on the expansive terrace with seating for 8 people and a state-of-the-art BBQ.
Santa Caterina Ionio Marina is gives onto eight kilometers of white sandy beaches and sparkling acquamarine blue water, and the hinterland is covered with olive trees and vineyards. The inhabitants of Santa Caterina Ionio reflect the warm and friendly Mediterranean hospitality. People are polite and are used to welcoming visitors from all over the world on a year-round basis, especially during the summer time.

The village provides all the necessary facilities and services for modern-day living: bank, grocery stores, supermarkets, two gas stations, several restaurants, bars, medical & dental clinics, legal and notary services, two schools, five churches, and a train and bus service that provides direct transportation to the airport, to Rome, and to other major Italian cities.
Posted by Holiday apartment in Calabria at 7:11 PM 2 comments: 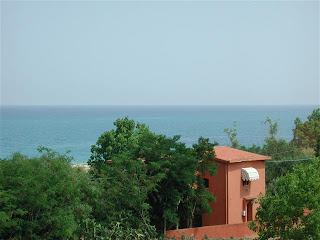 Very popular with Italian holidaymakers, the vacation delights of Italy's sun-bathed deep south are only now being discovered by the rest of us. Calabria is the heart of the Mezzogiorno (the Italian for 'midday' the phrase refers to the baking sunshine in which the region basks), and you'll know it as the toe of Italy. This is the region that 'kicks' Sicily in the Mediterranean Sea.
Calabria offers superb value for your euros, a little holiday money in Calabria can go a long way. And with coastline on three sides, curving round to meet the Ionian Sea on the south-eastern coast of Italy, Calabria has kilometres of sandy beaches, rocky coves, spectacular headlands ... and space.
For the information in this article see www.knowital.com/calabria/

Sunrise from the terrace over the Ionian Sea

Nunzia Apartment at the Colusseum

Your home in the Historic Centre